The existing family of Spalart-Allmaras DES models has been updated, and a new family of models based on the kOmegaSST model implemented, based on the references:

The picture below shows the validation and calibration of OpenFOAM DES models for decaying isotropic turbulence.

This feature was initially supplied by CFD Software E+F GmbH and integrated by OpenCFD.

A new radiation model has been implemented to model the effects of solar radiation. The new solarLoad model includes the sun primary heat fluxes, their reflective fluxes on walls, and the diffusive sky radiative fluxes.

The sky diffusive radiation for horizontal and vertical walls is calculated according to The Fair Weather Conditions Method from the ASHRAE Handbook.

By default, energy in cells adjacent to the patches are included in the energy equation (wallCoupled set to false in the radiation dictionary). On coupled patches (for multi-region cases) the flux is added to the wall heat flux by default and is considered into the solid (solidCoupled set to true). The reflected fluxes use a grey absorption/emission model, weighted by the spectral distribution. In order to activate the reflected fluxes the useVFbeamToDiffuse flag should be set to true, and the view factors calculated using the viewFactorsGen application.

The solarLoad model can be used inconjunction with fvDOM, viewFactor and P1 radiation models - but only using a single band spectrum. On the corresponding boundary conditions for these models the flag solarLoad must be set to true to take the solar radiative heat flux into account.

The new solar calculator model generates information related to the sun direction. The available models are:

The diffuse on vertical/horizontal walls and ground-reflected radiation are calculated following the ASHRAE Handbook.

Usage change
From this version the radiative properties, e.g. emissivity, absorptivity and transitivity of the patch, are given in the file $FOAM_CASE/constant/boundaryRadiationProperties on a per-patch basis.
Note
The number of bands in the Solar Load model MUST be the same as the number of bands specified on patches of the boundaryRadiationProperties file.

There are three modes that a model can be specified: 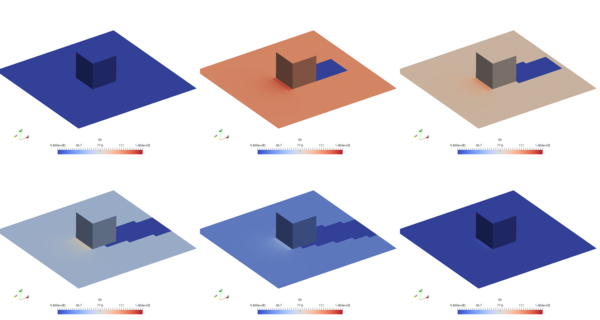 A new turbulent diffusion combustion model named diffusionMulticomponent for multiple step reactions has been implemented. The model assumes single a stream of fuel and oxidant for each reaction.

The reaction rate is based on the magnitude of the product of fuel and oxidant turbulence fluxes.

A finite reaction rate can be used to initialise the reaction rate, typically for lower temperature regions away from the mixing zone or during ignition using the laminarIgn option.

The diffusion reaction rate for k equation is given by:

is the effective diffusion,

the normalized Gaussian distribution centred on the stoichiometry value, and

a dynamic model constant, defined as:

is the oxidant remaining in each reaction (user input) and

a model constant with a default value of 1. 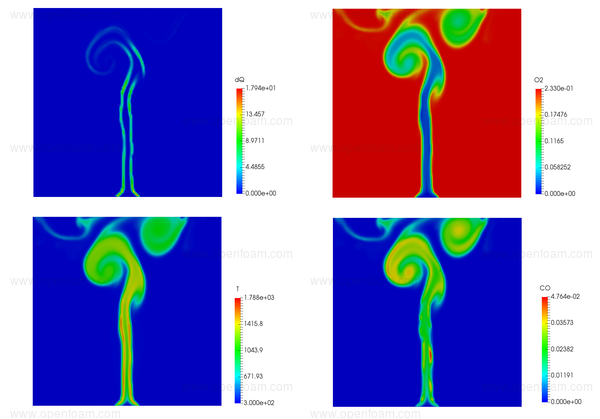 The pictures show the results after 3 seconds of fuel injection from the bottom injector into the atmosphere for the flame front, shown by the heat release contour, and temperature contours.

The new XiDyMFoam solver provides a moving mesh version of the partially premixed combustion solver XiFoam. The differences between the two solvers are small, and are similar to the extensions visible in rhoPimpleDyMFoam over rhoPimpleFoam.

Cases set up for this solver should be very similar to those designed for XiFoam. An additional divergence scheme is required for the selection of the mesh flux and pressure. This is specified in system/fvSchemes.

The solver also requires an entry for the pressure correction pcorr resulting from the mesh motion in the system/fvSolution file. This can usually be specified as identical to the pressure solver, but with a higher tolerance.

Finally a constant/dynamicMeshDict file is required to specify the mesh motion.

A new steady lagrangian solver which uses ‘coal’ parcels has been implemented: simpleCoalParcelFoam. The solver is very similar to the existing transient coalChemistryFoam solver.

The solver employs a single cloud of coal particles, which can undergo evaporation of any liquid/vapour content and devolatilisation to the carrier phase, and surface reactions. The carrier phase includes support for turbulence, heat transfer and combustion modelling.

The solver is based on the rhoThermoCombustion combustion class and therefore the thermo type must be set to heRhoThermo.

The new tabulatedNTUHeatTransfer inter-region heat transfer model calculates the heat flux between separate regions based on the Number of Transfer Units (NTU).

Usage: The model inputs are similar to the tabulatedHeatTransfer on which this model is based, e.g.

Additional parameters are required to define the geometryMode of the heat exchanger. Two options are available:

This feature was initially supplied by CFD+Engineering GmbH and integrated by OpenCFD.