An important feature of snappyHexMesh is to be able to specify regions of higher refinement in small gaps and between close features. Identifying these regions manually for highly complex surfaces with large length scale variations this might involve a lot of painstaking interaction.

This release adds the ability to detect and refine regions with close features automatically, e.g. for small pipes and gaps.

Usage is as follows:

// Optional limiting of gap detection based on the
// local surface normal (of the nearest surface).
// The default is mixed, i.e.
// ignore the normal and detect gaps irrespective
// whether they are inside or outside of the geomtry.
// - options: inside, mixed, outside
gapMode inside;
}
}

The specification is enabled by using the gapLevel keyword in a refinementRegion (in the refinementRegions section in the snappyHexMeshDict dictionary) and consists of three integers:

The minimum and maximum cell levels select the set of cells to operate on, the number of cells in the gap determines for this set of cells how large a gap is detected. Optionally the gapLevel can be overridden on a per-surface basis in the refinementSurfaces section. This will override all three settings but can never extend the set of cells, only limit it. 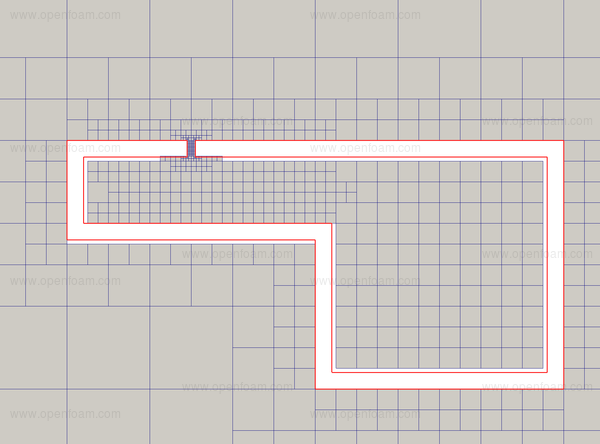 The refinement, i.e. edge-based, surface-based or volume-based, can now be limited to geometric regions using the limitRegions section. This syntax is equivalent to the refinementRegions level specification and gives an upper limit for the refinement level inside any region.

snappyHexMesh can add layers to any existing patch, irrespective of whether the patch was present in the initial mesh or added during meshing.

This functionality has been extended to allow layer addition to face zones by internally converting the face zone into baffles on two separate patches, named <faceZone> and <faceZone>_slave. 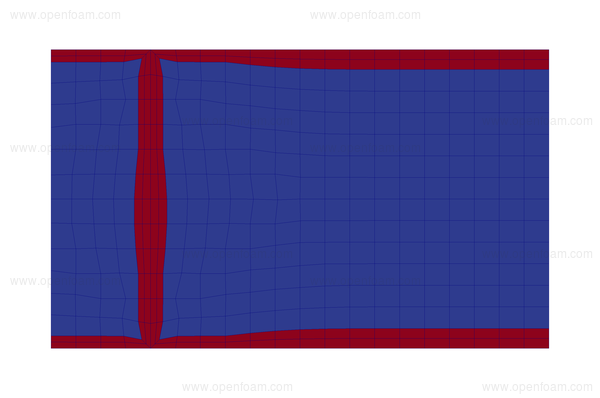 The process to define faceZones and cellZones in cases with bordering geometries has been extended. Firstly cellZones can now be assigned purely by walking across connected regions and are no longer related to a particular geometry. In other words they behave similar to locationInMesh, which is determined by walking all visible parts of the mesh. Secondly, faceZones are now automatically generated from each combination of cellZones. Faces that have neighbours in different cellZones will be allocated into a generated faceZone. The new behaviour is controlled through the locationsInMesh, locationsOutsideMesh and faceZoneControls entries:

castellatedMeshControls
{
// (Optional) points that should not be reachable from the
// location(s)InMesh. Meshing will abort if with an error message.
locationsOutsideMesh ((100 100 100));

// Points, one per region, and an optional name of a cellZone. "none" is
// the special name for the unzoned mesh region. Any face between different
// regions get added to a faceZone with name
// <cellZoneA>_to_<cellZoneB> where A is the lowest numbered
// cellZone. 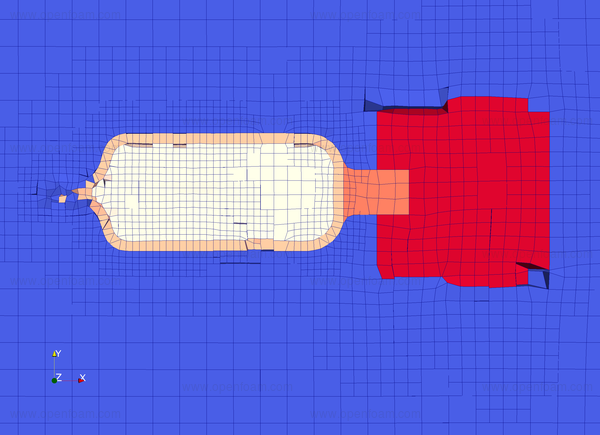 In earlier releases of OpenFOAM the refinementRegions operated on a per-surface basis. This has been extended to include a per-region basis, enabled by the new subTriSurfaceMesh geometry type. The new type performs an on-the-fly subsetting (based on a set of regions) of a previously defined triSurfaceMesh. This new geometry can now be used as any other geometry, i.e. both as a refinement-surface or -region.

Usage is as follows:

The set of analytical shapes to define primitive parts has been extended to include a new searchableCone: an optionally hollow, truncated cone. The specification is similar to the existing searchableCylinder: 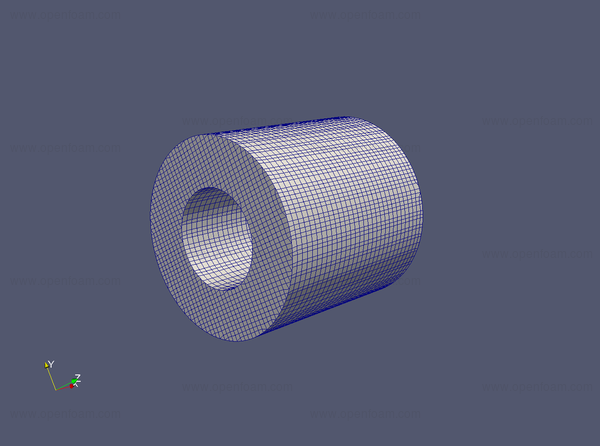 The second new shape is a searchableRotatedBox: a box defined via minimum and maximum co-ordinates, rotated by co-ordinate system at the box centroid:

In this version the logic has been updated to 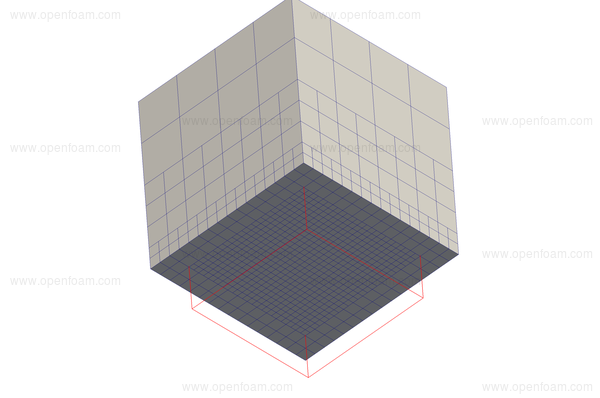 The snappyHexMesh procedure introduces uses a cell-splitting method to create finer cells. At the interface between coarse and fine cells this produces a non-orthogonality of around 30 degrees for an initial hex cell. This non-orthogonality can be improved by smoothing the mesh at these interfaces.

In this version, the points on faces where the refinement level changes can be smoothed. This new behaviour is switched off by default but can be enabled with the new nSmoothInternal setting in the snapControls section.

In the current implementation the value of nSmoothInternal can never be larger than the number of patch smoothing iterations nSmoothPatch. 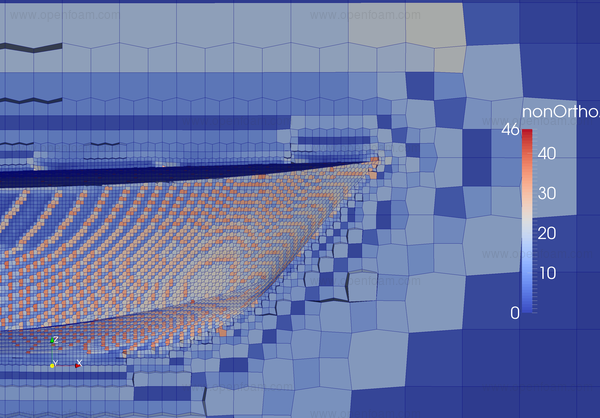 The default behaviour of snappyHexMesh is to try to align existing mesh edges to features. This sometimes causes faces which are concave, which usually appear as non-orthogonality of the extruded mesh. This will limit the amount of layer coverage.

To avoid this scenario, new optional settings enable splitting of faces along a diagonal if the operation results in a mesh edge which better conforms to the feature.

The behaviour is controlled by the settings:

snapControls
{
// When to run face splitting (never at first iteration, always
// at last iteration). Is interval. Default -1 (disabled)
// Recommendation: set to half the number of feature snap iterations

addLayersControls
{
// Do not extrude around sharp edge if not both faces are extruded.
// Default is 0.5*featureAngle. Set to -180 always attempt extrusion
layerTerminationAngle -180;

The main phase of the layer addition process is the shrinking of the existing mesh to make space for the layers. This process is now run-time selectable, using the optional meshShrinker parameter. The default is a medial-axis algorithm, but any of the existing displacement motion solvers can be used:

Note that most displacement motion solvers might require additional entries in fvSchemes, fvSolution.

The subsetMesh utility can be used to extract cellSets from an existing mesh. This extraction can cause internal faces to be exposed, which are subsequently assigned to a new faceSet called ‘oldInternalFaces’, or to an existing patch by the -patch option.

This functionality has been extended to assign the exposed faces to the topologically nearest patch from a supplied set, including wildcards, with the new option -patches. A typical use might be to remove some borderline cells that checkMesh has picked up.

In order to visualise problematic regions, the checkMesh application has been extended with a -writeSets option which will parallel reconstruct and write all faceSets and cellSets in any of the surface formats (currently dx, ensight, nastran, raw, starcd, vtk). In case of a cellSet, the faces on the outside of the cellSet are reconstructed.

New files will be created under postProcessing/<time> 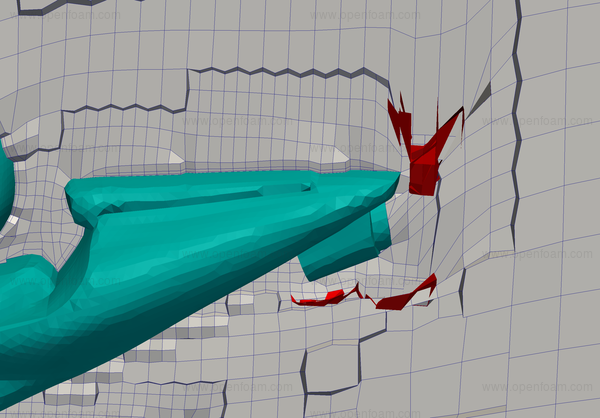 The existing surfaceAutoPatch utility could split a surface into patches based on a feature angle. In this release the functionality has been generalised and renamed to surfacePatch.

It performs a set of operations on triangulated surfaces, e.g. geometric feature angle splitting, and the new regioning based on intersections with another surface. The input is provided by a surfacePatchDict dictionary consisting of the description of the geometry in snappyHexMesh familiar notation and a set of operations to perform on a surface.

The example shows how to re-patch region maxZ of the unitCube surface based on a 60 degree feature angle (i.e. the old surfaceAutoPatch functionality), and will cut (all regions of) the singleTri surface with a box of size 1, putting all triangles in a separate region. 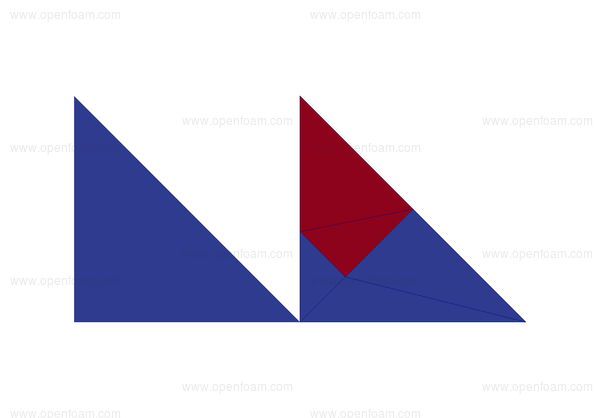 The utility accepts a -dict argument to change the location of the surfacePatchDict dictionary.

The existing surfaceBooleanFeatures utility has been extended with a -trim option to enable the manipulation of feature edges:

where the new feature edges will be clipped based on the exterior of plane.obj.