Finite volume based mesh motion solvers calculate a cell-centred displacement field. This is interpolated to the internal points using volume-to-point interpolation. Boundary points on value patch types are not given the interpolated value, however; their displacements are set by the relevant boundary condition. The inconsistency between the boundary points and the points in the interior can result in an accumulation of error as the point displacement increases. For very thin layer cells, this error can result in the boundary-adjacent cell becoming significantly distorted.

Only patches which specify a value for the motion should be specified. This includes fixedValue conditions and all derived types. Patches with slip, empty and zeroGradient conditions should not be included in any group.

The picture below shows an example of the improved layer motion for an airfoil case, where the top image shows the original method with strong distortion near to the wall, compared with the improved form. 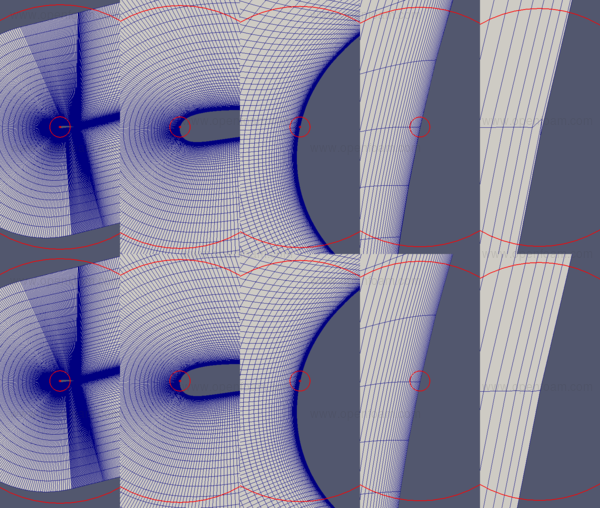 Based on the references:

Example of the DEShybrid scheme specification using linear within the LES region and linearUpwind within the RAS region:

This feature was initially supplied by CFD Software E+F GmbH and integrated by OpenCFD.

A constraint to dampen velocity fluctuations in steady simulations has been added. In case of velocity exceeding a limit, it applies a source/sink to remove the excess velocity by adding a term that drives the velocity to 0 (note that we cannot use the old time velocity since it most likely is already excessive). This additional constraint is scaled with

is a local time scale given by velocity/cellsize so it switches off if the velocity is below UMax.

The number of cells limited will be displayed and should fall to 0 as the simulation proceeds.

The constraint can be activated by adding following to the $FOAM_CASE/system/fvOptions dictionary: