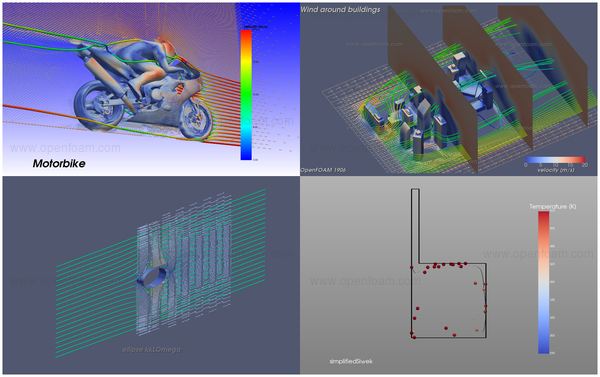 The forces and forceCoeffs function objects now report side forces and yaw moments, and the input directions simplified by making use of co-ordinate systems.

Users are now only required to specify an origin with two orthogonal directions, and can be added by the three options shown below:

The new lambVector function object calculates the Lamb vector, defined as the cross product of a velocity vector and vorticity vector. The divergence of the Lamb vector provides a quantitative connection to the spatially localised instantaneous fluid motions, e.g. high- and low-momentum fluid parcels that have the capacity to affect the rate of change of momentum, and to generate forces such as drag.

An example of the usage involving the divergence computation of the lambVector is shown below:

Plotting an iso-surface for the channel case shows that the resulting field is able to capture the turbulent content of the flow.

A new line sampling method, patchEdgeSet, samples values on patch edges that intersect a user-defined surface. The surface is of the generic searchablePlane type. Typical examples are plane or triSurfaceMesh (triangulated surface)

In below figure the pressure on the top patch has been sampled with a triangulated sphere. 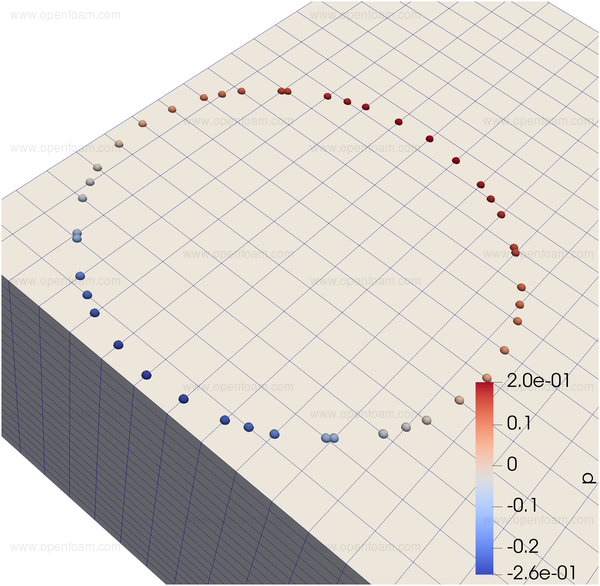 Usage is usually through the sets functionObject:

Note that the resulting points are sorted according to the distance to the provided origin.

The run-time control function object was introduced in OpenFOAM-v3.0+ to provide a mechanism to terminate and write a calculation based on a set of run-time conditions. The set of conditions include:

The v1906 release extends what happens when the conditions are satisfied by adding an option to emit ’triggers’. The triggers can be used to start other function objects to provide highly customisable workflows.

The action to perform is controlled by the optional satisfiedAction entry, which can take the values of:

Function object time controls now have an optional controlMode entry to control when the object is active that can be set to:

If the trigger is activated by satisfying a set of run-time conditions, all function objects that are set to start based on that trigger ’index’ will be activated.

Putting this together, it is possible, e.g. to start reporting the minimum and maximum values of all fields and set the calculation to stop 100 iterations after the average the drag coefficient from a forces function object changes by less than 1e-3:

Improvements in surface sampling and writing

The infrastructure for surface sampling and writing has received an extensive overhaul for improved functionality and flexibility. In previous versions the surface writers were somewhat awkward when being used within parallel code, but the worst part was that they were entirely stateless. This would be especially noticeable when sampling surfaces and writing in VTK format. The uncoordinated output meant that a separate file would be generated for each sampled field.

Surface writers can now be time-step aware, which allows generation of sampled VTK output with all sampled fields at that timestep.

Any parallel data reduction and any associated bookkeeping is now part of the surface writers themselves, which improves their re-usability and avoids unnecessary and premature data reduction at the sampling stage.

Different output formats are supported on a per-surface basis as well as the ability to optionally store the sampled surfaces and fields onto a registry for reuse by other function objects. It is therefore now possible to simply sample-and-store a surface and use that surface and its values at a later stage in a surfaceFieldValue function object to calculate operations such as min/max etc.

It is now possible to add a colour table to sampled surfaces written in x3d format, which makes for convenient direct import into rendering tools such as blender.

The sampledSurfaces dictionary entries are backwards compatible, but there are additional features: