OpenFOAM v1906 includes the first release of a major new set of functionality targeting automated gradient-based optimisation loops assisted by the continuous adjoint method. The code is under active development and further extensions will be released in future official OpenFOAM releases.

This is the first project sponsored and released under OpenFOAM’s new Governance framework.

Adjoint methods are used to compute the gradient (or sensitivity derivative) of engineering quantities, usually referred to as objective functions, e.g. drag, lift, with respect to a number of so-called design variables, e.g. control points parameterizing an aerodynamic shape. The major advantage of adjoint methods is that the cost of computing this gradient is, practically, independent of the number of design variables. To achieve this, a single set of adjoint PDEs is solved to compute the gradient of an objective function. This reduced cost allows for computing the so-called sensitivity maps, i.e. the gradient of an objective function with respect to the normal displacement of boundary nodes, with thousands or millions of design variables as shown below. Sensitivity maps are a valuable tool that can guide the designer in early design stages and pin-point the areas with the greatest optimisation potential.

OpenFOAM v1906 includes the adjoint to incompressible steady-state flows, supporting also the differentiation of the Spalart-Allmaras model, with and without wall functions. The available objective functions include forces and moments for external aerodynamics and total pressure losses for internal aerodynamics. Sensitivities are computed with respect to the normal displacement of the boundary wall nodes/faces.

Most of the parameters pertaining to adjointOptimisationFoam are set-up through a the input optimisationDict dictionary, located in the system directory. As new PDEs are solved, additional entries are required in the fvSolution and fvSchemes dictionaries; boundary conditions for the adjoint fields also need to be prescribed in the start time directory.

and contributions in earlier version from

Turbulence models have been assessed and updated as necessary. The nutUSpaldingWallFunction boundary condition performs an iterative procedure to obtain the friction velocity

, exiting when the error reduces to within a specified tolerance. This can now be specified and on restart will preserve the initial nut values if they are sufficiently converged:

Note that this tolerance should be tight to avoid triggering this special behaviour during running.

Some turbulence models require the distance to the nearest wall patch. The set of methods to calculate this distance has been extended to include an exact method. This triangulates the wall geometry and returns the correct nearest point on the nearest triangle of the nearest wall face, independent of the decomposition.

The new method is made available by adding library libdistributed.so to the controlDict set-up, e.g.

The resulting distance can be tested with the test application Test-wallDist in applications/test/wallDist. For example, the following image shows the distance field for a modified cavity tutorial case where only the top patch is of type wall. 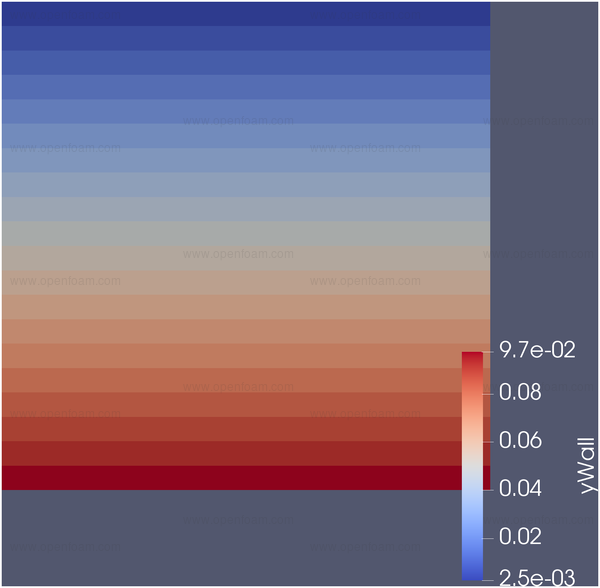 Note: the exact distance method is complex compared to other variants, reflected in the time taken to compute the distance field, e.g. on a large case:

The GAMG framework employs a linear solver to solve the residual correction on the coarsest level. This is currently:

Each solver dictionary using GAMG can now optionally provide a sub-dictionary coarsestLevelCorr containing the settings for the coarsest level solver. Tolerances are taken from the parent-level GAMG entries if not specified.

coarsestLevelCorr
{
solver          PCG;
preconditioner  DIC;
relTol          0.05;
}
}
The example above selects the PCG solver and a loose relative tolerance of 0.05. The absolute tolerance is taken from the GAMG settings.

In general it pays to use the best available solver at the coarse level since it contains so few cells, defined by the nCellsInCoarsestLevel entry, having a default value of 10. For parallel runs the communication overhead inside the coarse-level solver can be a performance bottleneck. Here it is advantageous to lower the number of coarse-level sweeps even if it slightly increases the overall number of GAMG cycles. The two useful controls are

As a test the $FOAM_TUTORIALS/pisoFoam/LES/motorBike/motorBikeLES tutorial was run for 10 iterations. Employing a loose relative tolerance for the coarse level solver shows a drastic reduction in the number of sweeps of the PCG solver, whereas the number of GAMG cycles remains almost constant: 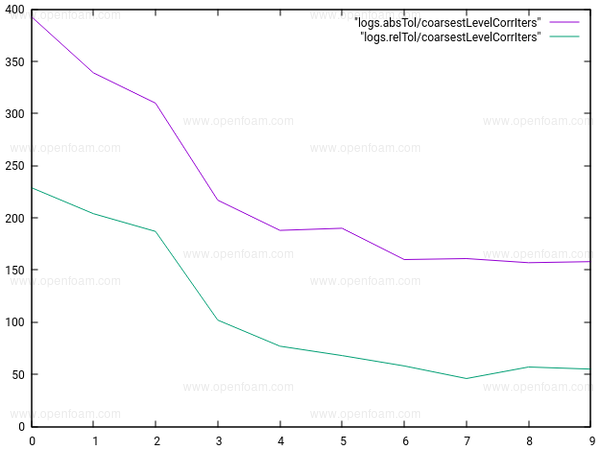 Coarse-level solver performance can be observed by setting the following debug switches in system/controlDict:

This release includes a new option to compile the linear solvers using double precision and the remaining code using single precision. The new mode is SPDP and can be selected with the command

wmSPDP
Similarly, wmDP for double precision and wmSP for single precision. This will set the:

The OpenFOAM header Arch field now shows the type of floating point used in the linear solvers by the solveScalar keyword:

The wm macros are convenient in mixed workflows:

There are two main improvements to the overset framework:

The new oversetInterpolation method employs a voxel mesh to accelerate geometric queries. It requires the regions of interest, defined using a single bounding box, and its number of subdivisions in the x, y and z directions (per mesh):

This method is still under active development, where testing has shown a large improvement in the mesh update time.

The main building block in the overset method is interpolation from cell(s) to cell. For moving meshes there is no guarantee that the donor cells reside on the same processor as the interpolated cell (acceptor cell). In previous versions remote-cell contributions provided consistent effects in the vector-matrix multiplication (the building block of most linear solvers) but not in other routines. In this version remote-cell contributions are handled in exactly the same way as ’normal’ processor boundaries, by dynamically constructing processor boundaries, leading to parallel consistent linear solver behaviour: