Fluid and vapour properties are set in the transportProperties dictionary, e.g. for the flow of FC-72 coolant:

term into the energy equation, the pDivU switch must be set to true.

Particles are modelled using the same approach adopted in the MPPICfoam solver, including the effect of the volume fraction of particles on the continuous phase.

To limit the particles crossing the interface, typically from liquid to gas, a new interface force was introduced. This force acts in the direction normal to the interface and only near the interface according to the expression

is the particle mass,

the liquid volume fraction, and

The following animation shows the results from the tutorial case, showing particles being lifted as the column rises, and subsequently falling under the effect of gravity.

The new acousticDampingSource fvOption has been implemented to damp spurious pressure waves for acoustic analyses. The new acoustic damping, sometimes referred to as an acoustic sponge-zone, combines the theories of acoustic resistivity, porous resistance and inertial under-relaxation based on a reference solution taken from the far-field steady or mean flow. The new model is designed to:

The user supplies both a damping coefficient, targeting a frequency or frequency range, and a ramping distance based on characteristic wavelengths, e.g.

, is damped using a cosine-ramping function within 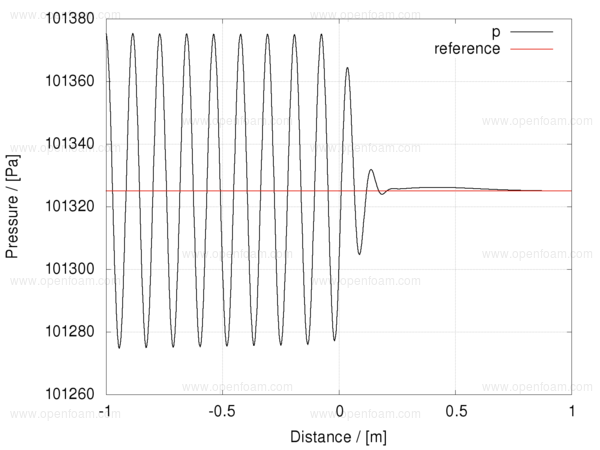 A 3-D example of acoustic damping of a shedding cylinder is also available in OpenCFDs Exchange Platform Knowledge Base.