Bending waves are the main contributor to acoustic sound radiation from vibrating shell-type structures. For thin shells of homogenous material the first order motions of vibration are described by the Kirchhoff-Love plate theory. With reasonable assumptions, this theory reduces to a two dimensional bi-harmonic wave equation. For vibro-acoustic applications this needs to be extended by some damping mechanism to ensure the expected frequency dependency behaviour.

To calculate the sound radiation from the bending wave motion, a straightforward approach is the formulation of a boundary condition for the acoustic wave equation.

The new acousticFoam solver targets the linearized acoustic pressure equation under the assumptions of an homogeneous and quiescent medium.

BC to handle vibrating plate and coupling to acousticFoam

This gradient-type condition applies a fixed gradient to the acoustic pressure equation, and also holds the material properties of the flat plate, i.e. rho, E and nu.

The only vibrationShellModel available with this release is the KirchhoffShell model where only normal displacements are permitted.

The name of the finite area region is given by the keyword region in the vibrationShell boundary condition. Thus, all the variable solved by the finite area will have a appended _<region> to their name, e.g. the plate thickness, h, will be written pa_<region1>.

The flat plate solution is controlled via /system/faSolution file:

An example usage in system/faOption follows:

This looks for a folder in constant/boundaryData/window/<times>/p and an associated points file.

The new clampedPlate boundary condition imposes a zero displacement and gradient to the nodes of the plate.

The new acousticWaveTransmissive condition was introduced, where the acoustic speed is input by the user (and not calculated). As the acoustic equation is solved the Courant number is known and there is no need to introduce an extra convective velocity as the medium is assumed to be still.

Many incompressible volume of fluid (VOF) cases solved using the interFoam application suffer from spurious velocities at the phase interface, which lead to wave damping due to turbulent viscosity over-production. These effects are created, in part, by the large density gradient between phases. Taking into account the variation of density between the phases into the turbulence transport helps to reduce this effect.

A new option has been added to the interFoam and interIsoFoam. solvers. The non-uniform density approach is controlled by the density keyword in the turbulenceProperties dictionary as follows:

By default density is set to uniform to recover the behaviour of earlier releases, ensuring backwards compatibility.

Source code
$FOAM_SRC/fvOptions/sources/derived/buoyancyTurbSource
Tutorial
$FOAM_TUTORIALS/multiphase/interFoam/RAS/damBreak
Attribution
This new feature was prompted by Wenyuan Fan who contributed to the present formulation of an incompressible non-uniform density turbulent transport for VOF.

The feature from openfoam.org allows the use of generalized Newtonian models for both compressible and incompressible flows. It forms part of the laminar turbulence framework, controlled using the entries within the laminar sub-dictionary.

Note that the option to include viscosity models through the transportDict in incompressible solvers is still available, but will be deprecated in future versions.

The following models are available:

The model is specified in the turbulenceProperties dictionary as follows:

This feature from openfoam.org allows the use of a tabulated equation of state (EoS), viscosity transport and thermodynamics.

The tabulated EoS is called icoTabulated and comprises an incompressible formulation, the new thermo functionality is called hTabulated and the transport viscosity model is named tabulated.

As an example, the models are specified in thermophysicalProperties file as follows:

Noise-related models have been refactored, and A, B, C, and D weightings made available.

The weighting can be selected using the new SPLweighting keyword, where options include: 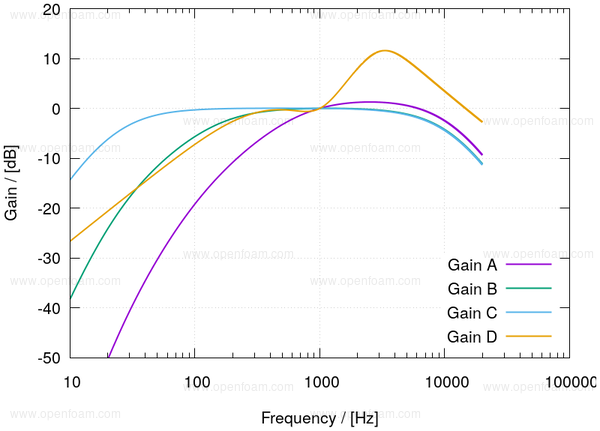 The buoyancyTurbSource finite-volume option applies sources on turbulent kinetic energy, k, and either turbulent kinetic energy dissipation rate, epsilon, or specific dissipation rate, omega, to incorporate effects of buoyancy on turbulence in incompressible and compressible flows. It is generally applicable where density gradients exist such as compressible heat transfer and wave modelling using the volume-of-fluid method. The minimum working example of this finite-volume option can be seen below:

Universal aerosol condensation and evaporation models are typically formed by grouping droplet (or particle) components and applying simplifications, including:

Note on backwards compatibility: the old keyword constantVolume true/false has priority over volumeUpdateMethod.

The entry rho0 is now optional for multi-component parcels. If defined it is used; if not, the density is calculated from the original mixture. T0 is still used as initial parcel temperature, and Cp0 still required but is over-written by the mixture properties.

The new liquidEvapFuchsKnudsen model is based on a diffusion type of evaporation-condensation on particles composed of a liquid-solid solution.

The entry solution controls which components of the liquid and solid phases form the solution which exchange mass with the fluid, taking the format (’liquid’ ’solid’).

The new recycleInteraction particle interaction model enables particles to re-enter the domain having hit an outflow patch. Particles are reintroduced at random locations on the specified inlet patch with the same local velocity as the carrier flow. The recycleFraction is used to scale the number of particles represented by each computational parcel to represent withholding of a fraction of the particle volume.

The model is designed to be used with the multiInteraction patch interaction model, so that ’other’ models control how particles interact with non-recycling patches, e.g.

At run-time additional statistics are provided to show the progress:

The following video shows a case where particles are continually fed from the inlet on the left, and after exiting the domain on the right, are re-cycled via the upper patch.