This release adds user-selectable geometry calculation. The system/fvSchemes dictionary now has an optional geometry section which overrides the method to calculate the geometric properties:

The following schemes are available:

basic
This is the default scheme and provides the exact behaviour as previous versions. It calculates the mass centroid for faces and cells.
stabilised
Face centres are calculated using only positive triangle contributions and is supposedly more stable on concave/distorted faces. This is the default in openfoam.org.
highAspectRatio
This scheme blends between basic and an edge-length weighted, face-area weighted average. This avoids truncation errors on high aspect ratio cells, at the cost of being lower order. The blending is linear across the range minAspect, maxAspect (see example above).
averageNeighbour
Similar to highAspectRatio but followed by a pass to align cell centres on top of one another to minimise non-orthogonality.

Specifying the method to calculate the geometric properties instead of e.g. limiting the effect on discretisation means that it also affects the mesh generation. This is especially important for mesh generators that use the mesh quality e.g.snappyHexMesh.

The averageNeighbour scheme can be very effective for tetrahedral and high-aspect ratio prismatic boundary layer meshes. These might have a very high non-orthogonality angle in the prism boundary layer due to truncation errors and alignment.

The figure below shows a comparison of the distribution of the non-orthogonality angle when computed with the basic scheme (left) and averageNeighbour (right). 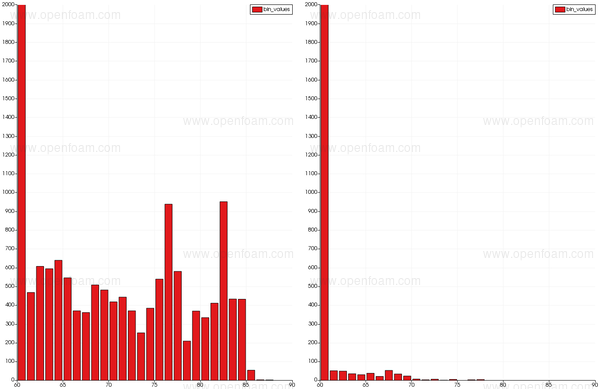 This release includes several improvements to particle tracking on moving mesh cases. These cases would often fail in earlier versions due to:

Particle-moving-wall interactions can under certain conditions, lead the tracking to stall. The problem arises when a particle hits a moving wall and the resulting particle velocity is extremely close to the wall velocity, and the particle final location is very close to the wall.

To counter this condition a new check has been added, where, if the final particle velocity after hitting the wall is below a threshold value the particle is deleted.

The behaviour is controlled by the new UrMax, set in the patchInteractionModel. It corresponds to the relative velocity between a particle and wall below which the particle is deleted. The default value of zero signifies that the particle should not be removed.

becomes negative. This improvement was ported from openFoam.org.

This improves performance in highly packed beds where the velocity correction can be considerable.

This change is transparent to the user and the MPPIC solvers (MPPICDyMFoam and MPPICFoam) are still available.

The sine and square Function1 classes now include support for frequency or period specifications. For slow oscillations it can be more intuitive to specify the period, e.g.

The new limitRange class provides a wrapper for Function1s that enables users to set minimum and maximum limits on input values. For example, applying limits to a polynomial entry:

Here, the return value will be: 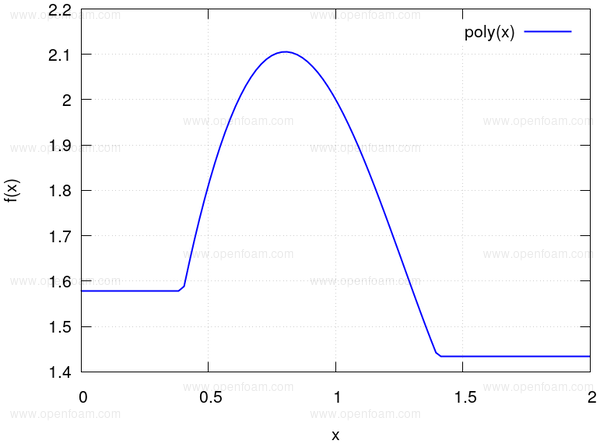