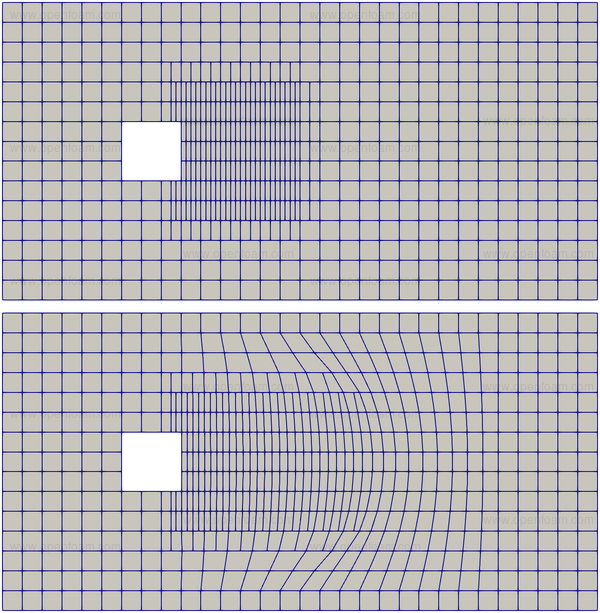 With complex geometries it can be easy to have the mesh ’spill out’ of the inside of the geometry. In this release there are two ways of detecting these ’mesh leaks’.

In snappyHexMesh the keyword locationsOutsideMesh specifies locations where the mesh should not go. In previous releases this would lead to an error message and exit. In the current release it analyses the mesh and determines the shortest path, walking from cell centre to cell centre, between the locationInMesh and the locationsOutsideMesh and writes the result as a sampledSet. This produces a file in a line-based format, e.g..obj in the postProcessing directory which can be loaded into a post-processor. Identifying where the path intersects the geometry is usually a good candidate for the leak.

The algorithm is run during the snappyHexMesh refinement stage so it should be fast in detecting these mesh leaks. The output of the mesh-leak can be in any format supported by the sampledSet framework through the optional setFormat keyword, where the default format is vtk.

The same algorithm can also be run stand-alone on any mesh through use of the shortestPath sampled set. e.g. removing the visor patch and some patch faces on the back of the motorBike tutorial allows the mesh to flood into the (previously closed) surfaces. These leak paths can be identified using:

// Colour the leak path by the processor ID
fields              (processorID);
}
}
Note that the shortestPath sampled set requires at least one field to operate on. In the above example the processorField function object is used to generate a field containing the local processor number. 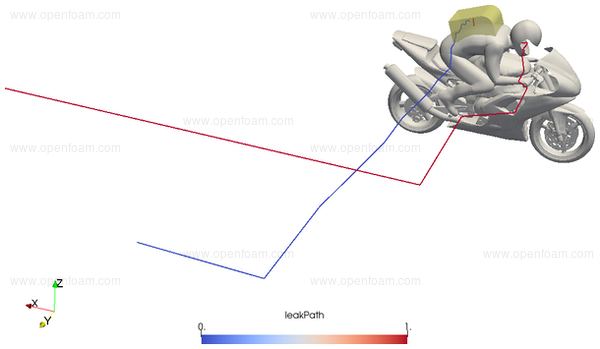 The decay of homogeneous isotropic turbulence is a standard test for validating turbulence models, but the initialisation can prove difficult. The new createBoxTurb utility, based on the procedure of Saad et al., makes this process straightforward by:

The following example compares the computed energy spectrum for a 256x256x256 mesh against the input spectrum of Comte-Bellot and Corrsin: 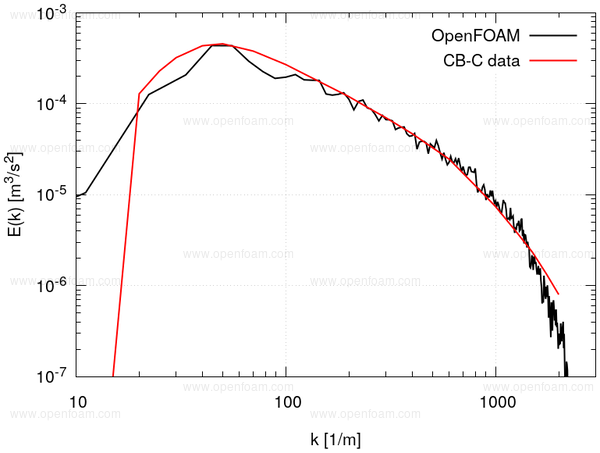 The resulting decay is shown below:

Improvements for topo-sets and searchable surfaces

In this version, existing cell/face/point selection mechanisms have been made more consistent with each other and with their searchableSurface counterparts. Their expected inputs are now also consistently documented in the API guide.

Where possible, support for multiple selections has been added e.g. accept patches, sets and zones instead of just patch, set and zone. This is a user convenience, but also a performance improvement for topoSet since it avoids intermediate writes.

The dictionary inputs for topoSet has been given a more compact, user friendlier syntax and the sourceInfo entry is now optional. For example,

The searchable surfaces, which are often used in snappyHexDict are available with shorter names as an alternative to the longer names.

As a text-driven code, setting and manipulating dictionary values lies at the heart of the OpenFOAM user experience. A focus for this release has been to harden the dictionary input, providing a more robust interaction when detecting and localizing input errors.

This means that some of your existing input dictionaries may have previously undetected syntax errors, which will now be detected and flagged as errors.

If you discover a false positive, i.e., it is incorrectly detected as an error please raise a gitlab issue.

Here is a small collection of the types of errors that could be encountered and what type error message or warning you may expect.